Private Economy is the Real Economy

The reality is that government is a leach on the real productive economy.  They are taking resources from the productive parts by taxation and money creation (inflation).   Government does not add to the economy, it sucks life out of the economy.

If we subtract government spending from the official GNP and scale for inflation, we get the following graph which gives a better idea of the Real Economy.

First, looking at this graph it is crazy for the stock market to be up by about a factor of 7 in the last 12 years.   The real economy is not doing anything close to that kind of growth.

Next, the idea that government spending fixed the recession last year so it was only 2 months is silly.   Sure they got the "official GNP" back up, but the real economy is still way down.

Posted by Vincent Cate at 5:08 PM No comments:

Biden and others have called Afghanistan the Graveyard of Empires.  There are a number of definitions of "empire" but here we will use:

Empire:  A government that collects taxes from other countries.

By this definition I believe the USA is an empire, though using a tax very few recognize.   As Keynes put it:

By a continuing process of inflation, governments can confiscate, secretly and unobserved, an important part of the wealth of their citizens.

After world war 2 the US dollar became the world reserve currency.   Since then Central Banks, businesses, and people all over the world have been using the US dollar and holding US bonds.   As the US prints more dollars, they are really collecting a hidden tax on dollar holders all over the world.   This is a most diabolical tax, as it is so secret and unobserved.   This "inflation tax" has gone on for more than 70 years.

Recently the pace of money printing has increased to trillions per year.   This may be getting to the "evil empire" stage, where there is a tax revolt.

The fraction of US debt held by foreigners has been dropping recently:

If enough people realize that holding dollars makes them subject to this tax, and so decide to no longer use the dollar, we could easily get hyperinflation.

The rest of the world could leave the dollar for something else.  For example, other central banks could use gold as reserves to back their own currencies.  Gold is what was used before the dollar and could work again.  A number of central banks do seem to be buying gold faster recently.   For international settlement, Bitcoin could work.    No doubt such a major change will be chaotic for awhile.  After the change most of the world could be better off, as they would no longer pay the US dollar inflation tax.   However, the USA will be much worse off, as they will no longer collect this huge inflation tax from the rest of the world.

Like other empires that failed after failing in Afghanistan, probably the American Empire is coming to an end. 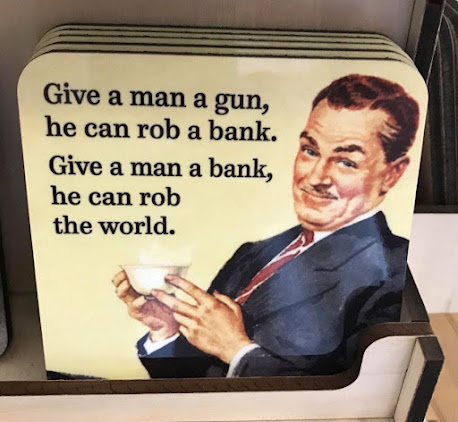 Posted by Vincent Cate at 11:23 AM No comments:

Devil in the Details

Posted by Vincent Cate at 1:27 PM No comments:

They say "no one rings a bell at the market top".   But there are signs that things are higher than normal or getting shaky.  I am collecting links that show charts indicating extreme stock, bond, or real estate valuations or things that often come before crashes.  If you know of other such links that you like, please comment and I will add them to the original post.  Thanks.

From the above, I think one of the most important charts is: 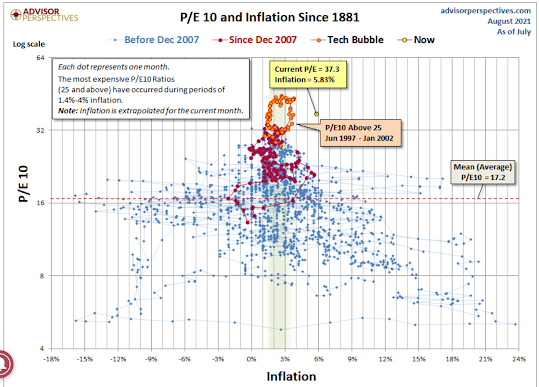 At the current inflation level we have never had such a high P/E before (yellow box).   If inflation gets higher this P/E will be even more extreme.

The reality is people expect inflation about like the current inflation.  As seen in the graph below, if the CPI (green line) goes up, as it has the last 4 months, people's expectations goes up too (blue line).   For Powell to think it it safe to print money because people are not expecting much inflation at this moment is foolish.   People's expectations can change in a month but the "long and variable delays" from policy change to inflation change  can take years.

Inflation can get into positive feedback loops that are very hard or impossible to control.  The central banker needs to take a long term view, because inflation responds so slowly to their policy changes.   It is irresponsible to make decisions about money creation based on a short term and fickle measure like people's expectations.

Posted by Vincent Cate at 5:09 AM No comments:

How Fed Fights or Encourages Inflation

As Milton Friedman taught, inflation is always and everywhere a monetary phenomenon, but there are long and variable delays between Fed policy inputs and the inflation result.   It can take years for inflation to show up, or go away, after a Fed policy change.

For the last few years the green line has been near zero and above, similar to the 1970s.   Having interest rates below the inflation rate is once again encouraging inflation.    Inflation is starting to show in measures like the CPI.

Posted by Vincent Cate at 7:06 AM No comments:

If we add up government debt, corporate debt, and household debt and divide by GPD we get a the following graph:

The grey areas in the graph below are recessions.  Note how whenever inflation is above 3% and going up fast it suddenly goes down and there is a recession?   The Fed has to take away the punch bowl as part of its mandate is to control inflation.  When it does this there is a recession.   Note we are above 3% and going up fast.   People think the Fed can keep the same easy money policy for the next two years.  Inflation would be way too high if they do that.  This should be last call for the punch bowl.

You can also see this in a graph of the PPI:

These two graphs make it look like there should soon be a recession.

However, this time it may not be possible to take away the punch bowl.   The Federal government is spending twice what they get in taxes and has huge debt.  They need the Fed to keep buying their bonds and to keep interest rates low.  If not for the Fed the interest rates would be much higher.  If interest rates on the debt were 5% it would take about half the taxes just to pay the interest.  In this case the Federal spending would be about 4 times the income left after paying interest.    They would be clearly insolvent and nobody would want to buy their bonds.  They really need the Fed to keep buying.   But if the Fed keeps buying then inflation will get out of control.   Probably inflation will get out of control.

It is strange that people can see the government making trillions of new dollars and then be surprised when inflation comes.   If you survey your friends, I bet your Libertarian friends are less surprised than your Democrat friends.

Posted by Vincent Cate at 1:07 PM No comments:

First, the money creation is much faster than normal as seen in this M1 Money Stock graph.  Does not seem transitory.

If banks pays no interest on money and the prices of things are going up fast, it is  rational to buy stuff needed ahead of time, before prices go up further.  In these conditions, storing real goods is better than storing cash.   Of course this only works for things that you can store for some period of time.   So diapers, cans of tuna, cement blocks, and computer chips, work well, but not bananas.

When money is no longer a good store of value, it is better to store extra value in extra physical things that you know you will use eventually.   This is called a flight into real goods (Flucht in die Sachwerte) or crack-up boom.  It is part of "how fiat dies".  We are probably seeing some of this now.
Misses put it well long ago:
Once public opinion is convinced that the increase in the quantity of money will continue and never come to an end, and that consequently the prices of all commodities and services will not cease to rise, everybody becomes eager to buy as much as possible and to restrict his cash holding to a minimum size.

You have to look at it from a Game Theory point of view.  The government is printing way too much money.  The value of the money is dropping.  So each player is better off holding real goods than money.   So as each player has extra money, they buy extra stuff, even if they don't need it right away.   Also, if there are shortages and they might not be able to get all they want in the future it is better to order extra stuff now.

You can also see it as an increased demand with no matching increase in supply, so prices should go up.   The supply was enough for regular use but not enough for goods to be used as a store of value.  So it can show up as "shortages".

If many people are ordering extra real good we could expect to see increased demand for shipping.  Sure enough, there is: 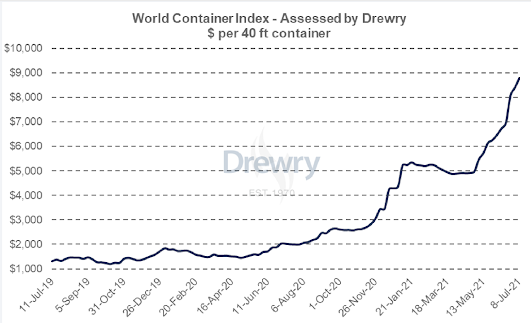 The above container price index does not look like a "transitory" problem.

That money is no longer a good store of value is probably the core problem causing the "shortages" and "supply chain" problems.  In the coming months it will become more clear if this is in fact what is going on.

Posted by Vincent Cate at 1:18 PM No comments:

Bank of America is reported to have said:

On an absolute basis, [inflation] mentions skyrocketed to near record highs from 2011, pointing to at the very least, “transitory” hyper-inflation ahead.

Because if there is one thing hyperinflation is, it's "transitory."

This was in a phone call and probably B of A wanted to say "high inflation" and not "hyper-inflation".  However, this could be a freudian slip, showing what they really think.
Normal money is both a store of value and a medium of exchange. Hyperinflation is the transitional stage where a money no longer acts as a good store of value but it is so far still being used as a medium of exchange.  Eventually it fails as a medium of exchange also,  and is no longer money.   So fundamentally hyperinflation is the transition period between half dead money and dead money.  It is the process of "How fiat dies".   So as the article says, "if there is one thing hyperinflation is, it's transitory".  :-)
Posted by Vincent Cate at 9:10 AM No comments: